Fig:1 (credit: vmware.com)
The distributed firewall is a hypervisor, kernel-embedded stateful firewall:
The gateway firewall is used for north-south traffic between the NSX-T gateways and the physical network:
Lets discuss both of the above firewall types in detail:
DFW(Distributed Firewall) works on ZTNA( Zero trust network architecture) or you can say TNO (Trust no one). All this can be achived with micro-segmentation and where distributed firewall fall in picture.
DFW basically pushes the firewall rules down to the virtual machine virtual nic as mentioned in below fig:2.

Fig:2 (Credit: vmware.com)
Its something pushing the intelligence as close to the source of the traffic as possible. Here source of the traffic is going to be virtual machine, virtual appliances, containers or even baremetal servers. As mentioned above workload could be different kind of which is being secure by DFW.
The beauty of microsegmentation is not only pushes the DFW firewall ruleset down to the VM virtual nic but also as that VM moves to other host using vMotion during balancing the cluster resouces or any other reason as per the need like who communicate to whom where the VM vmnic policy also sustain with the VM and secure its traffic. Same has ben demonstrated in below figure. 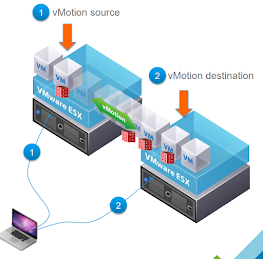 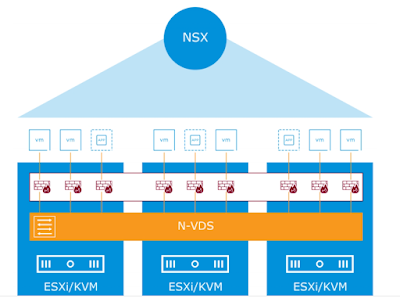 PS: Below config supports on hypervisor type ESXi only 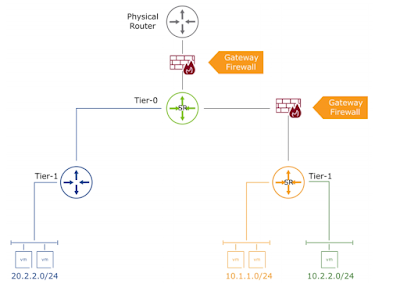 Fig:5
As mentioned in above figure, Distributed firewall can be applied at Tier-0 and Tier1 gateway as statefull and stateless. For statefull GW its require to have instantiation of SR router and Edge HA status require to be in active-standby state.
Hope this article help you in getting more insight about DFW and GW Firewall. :)

Unable to poweron the VM. (Failed to lock the file)

August 27, 2017
I have encountered may issues like where after some upgrade or migration we were unable to power on the VM. Figure 1 An error was received from the ESX host while powering on VM HSSVSQL01. Failed to start the virtual machine. Cannot open the disk '/vmfs/volumes/578d835c-18b2c97a-9b0d-0025b5f13920/SAMPLE1_cloud/000000.vmdk' or one of the snapshot disks it depends on. Failed to lock the file In above Figure:1, where while powering on the VM, its prompt for an error. Well, there are several reason for where the VM unable to poweron and you can find many article on this. Here in this article we will discuss to resolve this issue. Please use below step to resolve the disk lock issue  C hecked that VM is running on snapshot if its getting error " VM Consolidation required". Checked the snapshot manager if its showing any snapshot. If yes, try to delete the  snapshot. Verified the same from Esxi cl
Read more