In NSX-T we have two types of firewall which we will discuss into this post.


Lets talk about one by one..

A distributed firewall hosted at the host (hypervisor) level which is kernel-embedded statefull firewall. This kind of firewall mostly used in between the transport nodes or you can say within in east-west network.

Many people have a question like , if we have perimeter firewall at the physical layer to protect the network then why we require a firewall (distributed firewall) at the VM level......

To answer this question, Yes many of you are correct that perimeter firwall is there to protect the network at the top level. However, there are some attach which directly attach at the VM level like attach from USB drive, phishing emails and advertisements attracts.

To protect at VM level kind of attach its quite essential to deploy something which is (distributed firewall) in case of NSX-T. 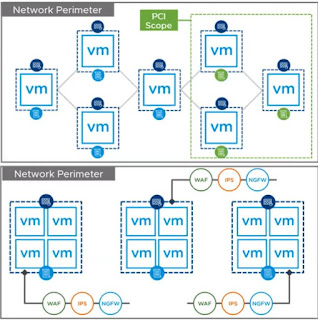 Lets point some of the highlights of distributed firewall.

Gateway firewall is also knows as perimeter firewall which protect the traffic to and from the physical environment.

It provide both North-South and East-West connectivity which enables tenants to access the public network, as well as connecting between different network with the same tenants.

The gateway router is a configured partition of a traditional network hardware router, commonly refereed to as virtual routeing and forwarding (VRF). It replace the hardware functionality create multiple routing domain with single router. 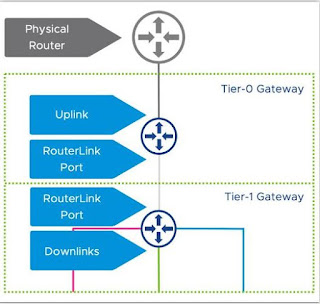 Gateway router perform a subset of the task that can be handled by physical router and each can contain multiple routing instance and routing table.

Using Gateway router can be an efficient way to maximize router usage, because a set of gateway router with a single physical router can perform the operation previously performed by several piece of equipment.

Some of the highlights of distributed firewall

A Gateway router is comprised of up to two components: a distributed router (DR), and optionally one or more service routers (SR).
The DR is kernel based and spans hypervisors, providing local routing functions to those VMs that are connected to it, and also exists in any edge nodes the logical router is bound to. Functionally, the DR is responsible for one-hop distributed routing between logical switches and/or Gateway routers connected to this logical router, and functions similar to the distributed logical router (DLR) in earlier viersions of NSX.

The SR is responsible for delivering services that are not currently implemented in a distributed fashion, such as stateful NAT, load balancing, DHCP or VPN services. Service Routers are deployed on the Edge node cluster that is selected when the T0/T1 router is initially configured.

To reiterate, a Gateway router in NSX-T always has an associated DR, regardless of whether it's deployed as a T0 or a T1. It will also have an associated SR created if either of the following is true:

Note: Above step is unsupported by VMware and may impact your SSL certificate and face problem while logging to vSphere Web Client.

If you are using self-signed certificate, you can regenerate the certificate with the help of below KB 2112283 article.

Could not connect to one or more vCenter Server systems: https://FQDN:443/sdk

November 15, 2017
Recently I got a case where vCenter 6.0 where the webclient was not showing inventory while loading. Issue occur when the customer was performing migration activity of virtual machine.
We verified that the vpxd services of vCenter, which is VCSA (Appliance), went into stopped stated just after starting means its crashing.
On VCSA Shell: service-control --status vmware-vpxd shows "stopped" service-control --start vmware-vpxd starts the service starts for a couple of seconds and stops again
VCSA 6.0 is linked with extrnal PSC 6.0. Verified the services of PSC and found all looks into good state.
Tried to power off both the VCSA and PSC and Power on in sequence where we started first PSC and later VCSA. After restarting the VCSA, status of the VPXD services was same as it was getting stopped after couple of seconds.
Checked the VPXD logs and found that the heartbeat between ESXi and VCSA was getting timed out for more than 1032 ms or more.
VCSA has generated the core dump at /var/core. …
1 comment
Read more